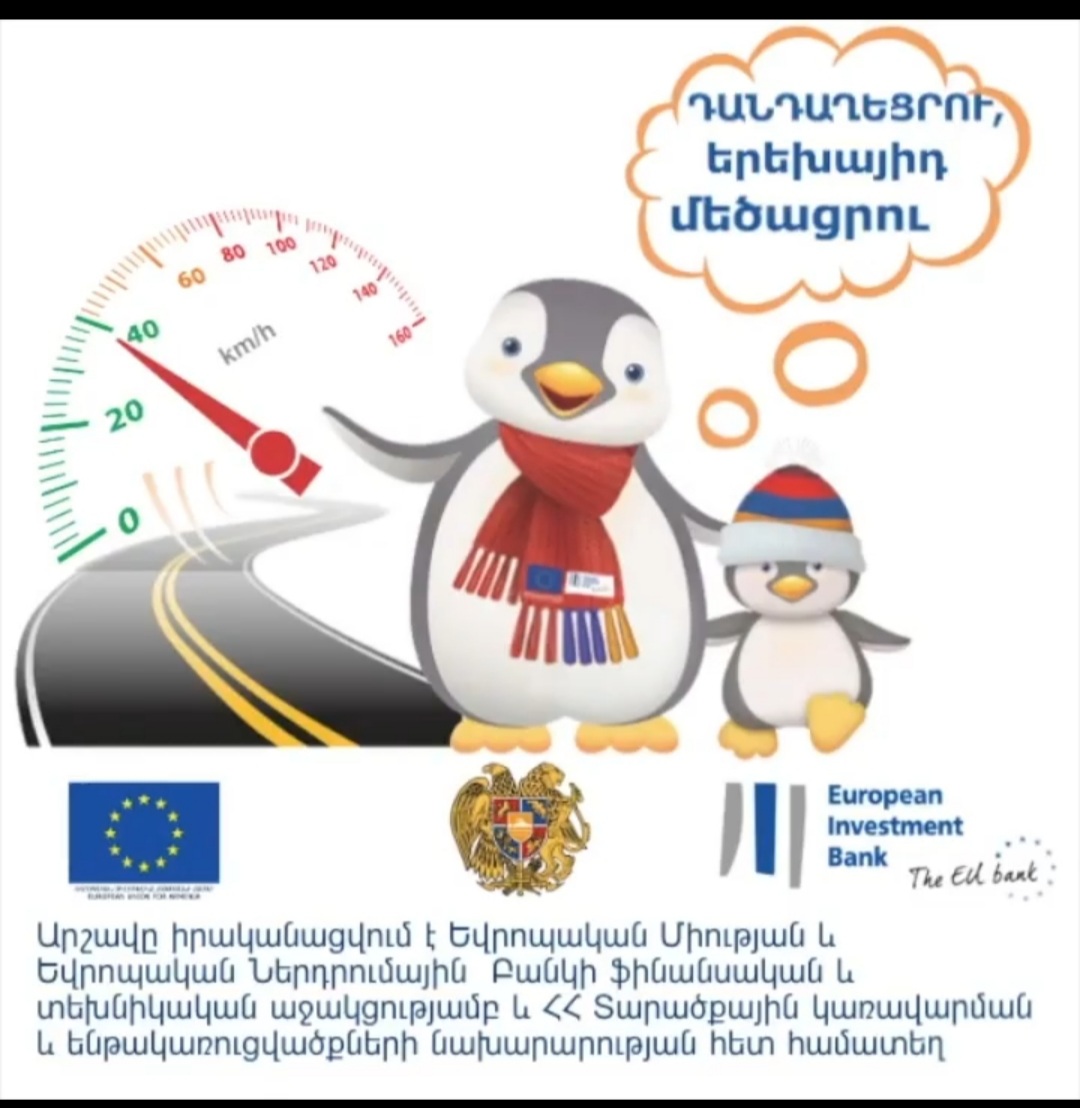 “Safety is in your actions”, a national communication campaign to reduce major traffic accidents, increase safety and save lives on Armenian roads was launched today by the Ministry of Territorial Administration and Infrastructure of the Republic of Armenia, with the technical and financial assistance of the European Union and its bank, the European Investment Bank (EIB).
The three-month nation-wide campaign aims to reverse the rising number of major traffic accidents in the country. According to the Armenian Road Police, the number of annual fatalities on Armenian roads has increased from 294 in 2010 to 348 in 2020.
The campaign is an integral part of the Armenia Road Safety Improvement Project set up to improve the traffic regulation infrastructure in the country with new pedestrian crossings, road markings and road signs. These measures are in line with the EU-Armenia Comprehensive Enhanced Partnership Agreement (CEPA) , which fully entered into force on March 1, 2021.

In his speech, the Minister for Territorial Administration and Infrastructure Suren Papikyan mentioned: “Our task is no prevent road traffic threats, reduce risks by protecting road users from traffic accidents. A number of measures are taken in that direction: improvement of road infrastructure, information campaigns, esc. The Government of Armenia is reframing its road safety policy, focusing on his prevention of death and serious injures in particular the “Vision Zero” and “Safe System Approach”, adopted in the new National road safety strategy for 2021-2040, which will be adopted in the near future. The campaign implemented jointly with the European Union and European Investment Bank, is aimed at improving road safety, which I am sure will greatly contribute to raising the level of road safety in Armenia.

Ambassador of the European Union to the Republic of Armenia, Her Excellency Andrea Wiktorin said: “Currently, there are too many lives lost on Armenian roads due to insufficient implementation of the road safety standards. This campaign addresses this situation and its primary goal is to protect the lives and health of Armenian citizens. Our main objective is to bring EU road safety standards to Armenia, as part of the road safety reform and in line with the newly implemented CEPA.”
Vice-President of the EIB, Ms. Lilyana Pavlova, who is the EIB’s Road Safety Champion, said: “Investing in safer roads is a high priority worldwide for the European Investment Bank, but building safe roads is not enough. Every accident where someone dies or is severely injured is a tragedy and in Armenia the number of these tragedies increases every year. So, we need to educate and persuade people to change their attitudes and behaviors.”

Vice-President of the EIB, Teresa Czerwińska, who covers Armenia at the bank, concluded: “The European Investment Bank is committed to supporting the people in the European Union’s Eastern Neighborhood. This road safety project is a great example of how by working together we can make a difference in people’s lives.”

The campaign will promote responsible road behavior and respect for the traffic rules and signalization as the most effective way to save lives and reduce the number of major traffic accidents.

The “Safety is in your actions” campaign will also introduce a road safety hour in all schools across Armenia, and use TV, social media, radio and outdoor communication, as well as TV talk-show programmes. An online webinar promoting road safety education will be employed in the first nation-wide mobilization activity of this kind in Armenia to date.

About the European Investment Bank
The European Investment Bank (EIB) is the long-term lending institution of the European Union (EU) owned by its Member States. It makes long-term finance available for sound investment in order to contribute towards EU policy goals both in Europe and beyond.
About the EIB in Armenia:
The EU bank has been supporting the economic and social development of Armenia since 2007, providing some €415 million to the local economy to date. The EU bank’s activities in the country have supported key transport projects (€174 million), micro, small and medium-sized enterprises and mid-caps (€166 million), water and sewerage (€37 million), energy (€15 million), services (€12 million) and solid waste (€10 million).
The EIB finances projects in Armenia under the EU External Lending Mandate (ELM). This provides the EIB with a guarantee covered by the EU budget for projects in the fields of social and economic infrastructure, local private sector development and climate action.

For more information on the campaign, please visit
Website: www.roadsafety.am