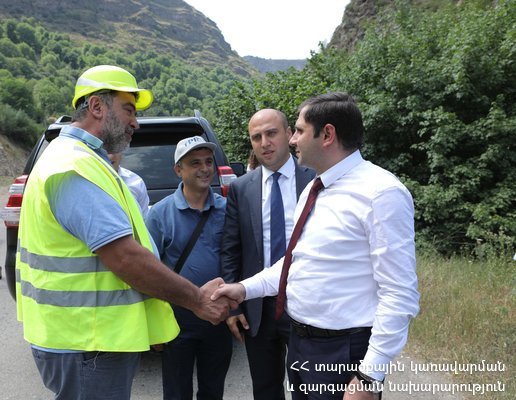 On 26 June, 2019 Mr. Suren Papikyan, Minister of Territorial Administration and Infrastructure of RA, accompanied by Mr. Bagrat Badalyan, Deputy Minister, was in Gegharkunik, Lori and Tavush regions to get acquainted with the ongoing and completed construction work of the interstate and republican routes M6 and M4.

The Minister visited the Vanadzor-Alaverdi-Georgia border (M6) highway. First, he was at Vanadzor-Tumanyan station, the construction of which was completed by the end of 2018. Mr. Bagrat Badalyan presented the implemented work to the Minister. He noted that 38.5 km of road was completely asphalted, the drainage system was restored, metal guardrails and road signs were installed, markings were made, sidewalks were repaired, etc.

The visit continued with the second part of the interstate highway (51,74 kilometer section) connecting Toumanian and Bagratashen customs checkpoint. The work had been launched here in May, 2018. The Minister's focus was on the construction site in Alaverdi where  the Contractor implemented construction of sidewalks, reconstruction of the drainage system, fencing of old asphalt pavement, etc.

Minister Papikyan talked to the Contractor, representatives of the Technical Supervision Consultant of the construction work. They touched upon the problems that were arising during the construction process and mechanisms for their solutions. It was noted that some of the design issues related to the utilities arose during the reconstruction of the road, but they were solved during the process.